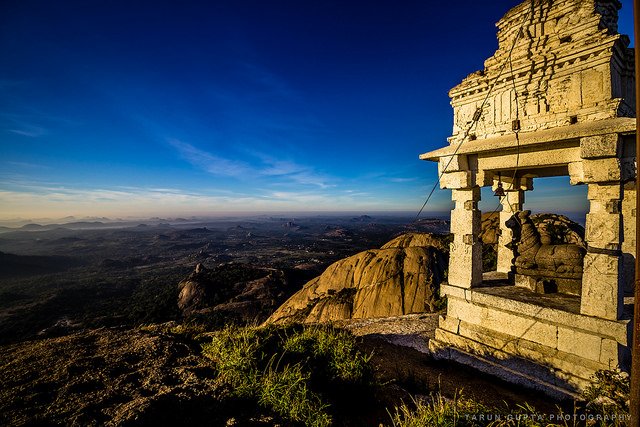 About Place: Savandurga is a place with a fort on a lofty mountain, about 60 km from Bengaluru. The hill consists of two granite cliffs of 4000 feet tall and 13 kilometers (8 miles) in circumference , one called Bilibetta or white peak, another Karibetta or black peak.

It was a prominent place during the Hoysala rule. Over a period of time several rulers held this place. The hill fort on the top of the outcrop was erected in 1543 by Samanta Raya. It then came to Immadi Kempe Gowda of Bengaluru until 1728 when it was captured by the Raja of Mysore from whom it passed to Haider Ali. During the Anglo-Mysore Wars of the late 18th century, Savandurga was the most forbidding of all the Tippu's hill forts in the area and hitherto deemed impregnable. Nevertheless, British troops under Cornwallis commanded by Lt Col Stuart mounted a successful assault against the fort in December 21, 1791.

The entire area is covered by verdure and serene atmosphere. This region is famous for medicinal plants and shrub forest. This is a paradise for the climbing enthusiasts. Climbers can scale sheer rock faces enduring up to grade 7. It is also good for a day's trek and camping at the foothill.

For any clarification email us at support@bmcadventures.com or call on 9611102222